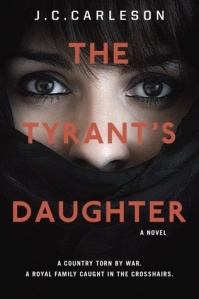 I received this free ARC from Netgalley.

I’m half Here. I’m half There. I’m a girl divided, which is to say that I’m no one at all.

This seems to be the main struggle of Laila, the narrator of The Tyrant’s Daughter. As the teenage daughter of the recently assassinated “king” of her country, she and her mother and younger brother find themselves in the United States where they struggle with not only their grief but the issues of adjusting to a new culture and finding a place where they fit after the loss of their royal status.

At first it seemed like this book was going to focus more on Laila and her struggles of transitioning into the teenage culture of her new country but about half way through the book picked up and revealed that there was much more going on beneath the surface of her family’s new life. It was a relief to finally have a somewhat more solid plot to grab onto. While watching Laila grow and develop was certainly interesting at first, the story just didn’t grab me in the beginning.  That being said, once I reached the half-way point of the book it was nearly impossible for me to put it down. The twists and turns kept me surprised and I was shocked by the end of the book and wanting more.

I am the Invisible Queen.

I absolutely adored Laila. She seemed very real in her interactions with the other characters and she wasn’t a one dimensional story teller. Throughout the book she grew and learned. Her view of the world and her family changed dramatically as she was introduced to new information and people that she otherwise would have never spoken to. Despite the fact that she finds it hard to adjust she manages by the end of the book to give herself a title and place in the family. As the “Invisible Queen” she is able to somehow gain a sense of control over her own life.

When I finished the book I wasn’t really sure how I felt about it. On the one hand I really loved the writing and how there were so many moments where I had to stop and just reread a sentence over and over. Sentences like this: I trace question marks into the wall with my finger as I listen. Curving left to right, as the symbol appears in English, and then mirrored, right to left, a question from home. Even our punctuation marks are opposites- no wonder I can’t fit comfortably here. But on the other, it took me much too long to become invested in the book. Normally something this length would have taken me half of the time to read than it did. But now that I’ve had a day or so away from it, I can’t get Laila and what her future might hold out of my mind. I’d love to read a follow up to this book but I’m also content for it to remain a standalone so that the characters can live out their stories in my mind.

Grab a copy here (Link leads to BookDepository- shipping is free for many countries!)