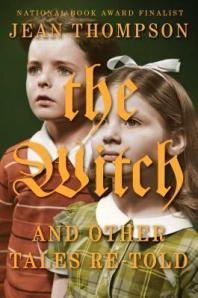 I received this book for free from Penguin’s First to Read program in exchange for an honest review.

I’ve always been a huge fan of fairy tale retellings so I was prepared to love The Witch by Jean Thompson once I read the summary. I have to say that I wasn’t disappointed. Thompson’s collection of modern day retellings was riveting. As each story began I felt a little like a detective trying to guess which fairy tale this one would be retelling.

Normally when one thinks of fairy tales, they tend to think more on the happier side of things: Cinderella finding her prince, Hansel and Gretel escaping from the evil witch, and all of the various “happily ever afters” that many of us grew up hearing. Too often we tend to forget that these stories- which have been Disney-fied and sugar coated over the years- were meant to teach a lesson to the children hearing them. Thompson takes us back to the gritty side of these tales and reminds us why Little Red Riding Hood had to fight off the big bad wolf and that sometimes curiosity has the habit of showing us the worst in people.

The writing was such that I felt sucked into each story and though I wasn’t given a novel’s length of information on each character I felt like I knew them fairly well. I wanted to know what was going to happen to them and after reading only several pages, I wanted to know how they came to be in the situations we found them in.

Of the group, I’d have to say that my favorite stories were The Witch- a Hansel and Gretel story- and Prince- a Beauty and the Beast tale. Both had characters that I was immediately drawn to. My only complaint would be that I wanted longer stories for both (though that’s honestly just because I enjoyed them so much). My least favorite stories by far were Faith- the Pied Piper retelling- and The Curse. This was due mainly to the description of the sexual assault in each- both were still well written but they made feel slightly sick.

I’ve never been a huge fan of short stories but Thompson did a wonderful job of fleshing out the characters and world in which they took place. I could see myself picking this up to reread some of my favorite stories in the future. I would highly recommend this for people who enjoy fairy tale retellings with a twist!