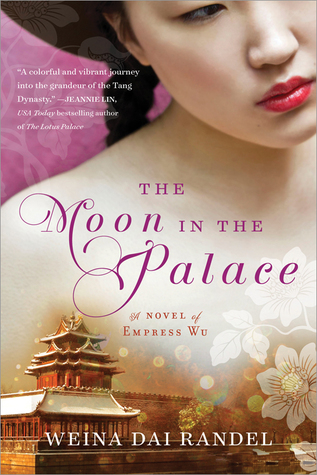 I received both of these books as free ARCs from Netgalley in exchange for an honest review.

When Mei is a young child, her father is visited by a monk who predicts that she will one day become the Empress of China. The monk says that though she will become a great leader, Mei will first need to endure many hardships. Hoping that Mei will one day bring glory to the family name, her father trains her to become a future leader. It appears that everything will go well, but one day Mei’s father dies in a tragic accident. That event changes life as she knows it and sets her on the path that will lead her to become the future Empress Wu.

The minute I saw this series I knew I had to read it! I’ve always loved historical fiction and find that it makes learning about historical figures and events even more fun. Going into this series, I knew little about Empress Wu and wasn’t sure what to expect as we watched Mei’s journey through the court. Unfortunately, it seemed like everything that could go wrong for her did. I found myself cheering for her victories and groaning in sympathy when she failed.

Mei begins her journey to become Empress Wu when she enters the palace as a concubine to the Emperor. Though she is new to court life and doesn’t know who to trust, she is able to win the Emperor’s attention through her intelligence and wit. Just as everything looks like it’s going to work out for Mei, she encounters betrayal and the negatives of living in a power hungry court. Her life becomes a series of ups and downs as each time she moves forward she’s pushed back two more steps. Through it all, Mei has one goal: fulfill the monk’s prophecy and bring glory to her family’s name.

Both The Moon in the Palace and The Empress of Bright Moon are hefty reads at just under 400 pages apiece. Despite their lengths, I found myself zooming through both books and wanting more. I became so attached to Mei and wanted to see if she had the happy ending that she was so desperately trying to achieve. Days after finishing the series, I was still thinking about it and wishing that I had stretched the books out farther. This series was an emotional read; it was hard not to become attached to the characters. I sense a re-read in my future!